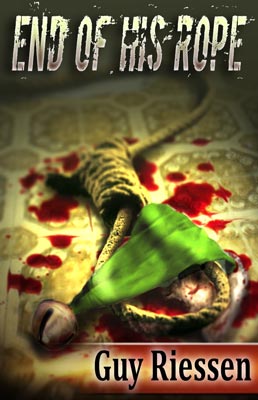 End of His Rope

W ith a crash, the doorjamb splintered and the door, now hanging loose from the top hinge, smashed into Jack McNeeb as he balanced on his only chair.

“What the…you have gotta be shittin’ me!” He shouted as he wobbled.

The thin legs of the cheap vinyl-covered chair buckled.

The noose snapped taut, cutting off his breath, while his toes dangled several inches above the floor. Jack scrabbled at the rope around his neck as a gray-mottled arm wrapped in a red sleeve trimmed with white fur reached through the doorway gap to push and claw at the door’s edge with jagged nails. But the bottom edge was wedged tight against the broken chair and the floor and the door didn’t budge. The arm snapped back out of Jack’s sight, while a high-pitched chittering voice and the sound of jingling bells came from the hallway.

There was another crash as the door burst off the top hinge and slammed into the overhead light fixture that held the noose. The metal conduit leading to the light bent with a squeal and pulled from the wall. Drywall screws pinged across the floor as the section holding the noose ripped free.

Jack fell. The rusted steel fixture dropped to the floor next to him. Its bulb popped and scattered glass.

He grabbed the noose and loosened it.

“What the hell?” he tried to say, but only air hissed out of his bruised throat.

The short red-jacketed creature wore stained green tights and pushed its way into his apartment. Long, pointed ears flopped as it shook its head, and a bell attached to its tall conical hat rang with every twitching movement. Its voice screeched at such a high register it took Jack a moment to understand what it was saying: “Very naughty! Very bad boy!”

The thing shoving its way into his apartment…that “thing” was a goddamn elf.

Not just any run-of-the-mill elf, no sir.

This was a Krampus elf.

Jack discovered a love of horror during his thirty-eight-month stint in lockup for assault…books, movies, YouTube shorts, anything he could get his hands on inside SD State.

The day he was released, he boosted a crappy laptop from a table at Starbucks when its former owner walked to the counter to get his venti-mocha-frappa-whatsit. It wasn’t much better than what they had in the prison but it had a screen, movie-player, and could download torrents on the city library’s wifi across the street.

The creature flittered in like it was dancing the damn Nutcracker or something. Its head low and squat, tucked under the patchy fur trim of its hat. Eyes like chips of hematite glittered in the glow of the streetlights outside the window, and a mouth far too wide for its face grinned with too many chalky white and jagged teeth.

Bloody strings of meat and gristle dangled from its jaw as it jutted its head forward and said, “Krampus say, ‘you pay the price, and pay it thrice.’”

Jack scrabbled backward across the floor. The rope from the noose dragged the light fixture across the dirty linoleum. He slammed into the leg of his street-haul card-table and he heard his laptop dump onto the floor with a crackle of breaking plastic. Ah shit, there goes movie night.

What kind of bad luck does it take to have a fricken elf interrupt your goddamn attempt to off yourself AND bust up your only entertainment? Jack Mcneeb luck, that’s what.

The elf’s head twitched at the sound of Jack’s voice, and its head cocked at a weird angle. Its black leather boots ground against the floor tile like dry kindling as it shifted its weight and moved toward him.

Standing quickly, Jack yanked the rope, pulling the fixture up to his right hand. He twirled it once overhead, then smashed it toward the elf’s head.  Its skull split like an overripe pumpkin, spewing black blood around the room in an arcing spray as the elf spun a perfect pirouette and collapsed in a twitching heap.

Jack poked the toe of his shoe at the grisly spasming pile of gray flesh, wicked teeth and Christmas clothes. The elf’s body rolled to the side and Jack watched the stupid green cone hat spin a lazy arc at his feet, its bell tinkling merrily. Feeling the pulse pounding behind his eyes, Jack clenched his jaw and his hands bunched into fists as he cast his eyes around the gore-spattered contents of his tiny room.

He pulled the noose over his head, let it drop to the floor, and kicked the rope aside.

Throwing the window wide, cold air slapped his cheeks. Outside, speakers on the lamp posts pumped out Christmas carols to call all the good boys and girls to their shopping duties.

Jack glared at the wreaths hung from every post for just a moment then flipped the folding table over and wrenched a metal leg from the pressboard top. His smile was stretched tight as he looked at the jagged rusty flange and the broken screws torn from the table top. It whistled through the air as he swung it.

He thought his dead-end life wasn’t worth living, but this was the kind of thing that someone was gonna pay for…no…not just someone. This debt was gonna come straight outa Krampus.

Ain’t no one gonna just screw up Jack McNeeb’s suicide with a goddamn elf.

IF YOU LIKED THAT STORY, YOU'LL LOVE THIS BOOK: 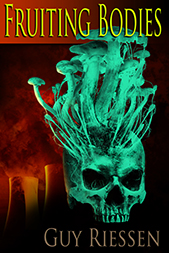 * Get Fruiting Bodies for FREE!

* Learn about New Free Fiction when it goes live!

Great, Thanks! Check your email for instructions to download your copy of Fruiting Bodies.

Your privacy is important! Your email will not be shared or sold. I will only use it to keep in contact with the greatest readers on the planet (readers exactly like you)!